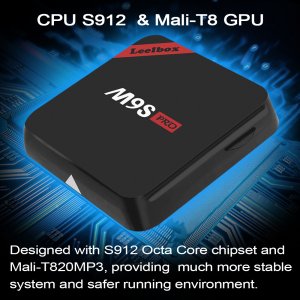 The Leelbox M9S Pro is another Android box to consider if you are looking for a new Kodi box. Packed with nice features and shippable to anywhere in the world, come check it out! Enter our contest to win one yourself.

The Leelbox M9S Pro is another nice Kodi box that comes with all Kodi 17 compatible features:

When you buy the Leelbox M9S Pro, you get 12 months of warranty and support on the box. Leelbox is a company who has been around for a while now and is well equipped to support their products.

When you open the Leelbox, you’ll see that it comes with a remote, HDMI cable, and power adapter. Simply plug everything together and connect it to your TV and you are off.

The interface of the Leelbox is similar to other Android Kodi boxes. In order to make sure you have the latest version of Kodi, click the Google Play icon from the home screen, sign in, and search and install Kodi from the Play Store.

Check out the specs of the Leelbox below and underneath that, enter to win a free one for yourself!!

We recently launched the KodiTips Forums as a place for Kodi users to discuss Kodi with each other. It’s grown to over 3000 posts and over 1500 members. Click here to check out the forums.

This contest is now over. Congrats to madkid for winning the Leelbox.