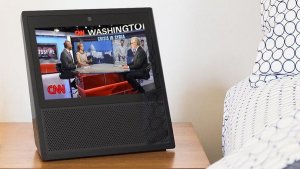 The Amazon Echo Show is the latest Alexa-enabled product from Amazon, which brings their virtual assistant into a speaker + 7″ touchscreen tablet interface. The Echo doesn’t come out until June 28th, but we are already looking into Amazon Echo Show Kodi integration for everyone to check out.

To learn about the Amazon Echo Show directly from Amazon, click here. Amazon is currently having an introductory pricing deal where you can save $100 if you buy two Echo Show’s, which means you get the second one at roughly 40% off.

The Amazon Echo Show syncs with a ton of great apps including Pandora, Spotify, tunein, Wemo, Samsung SmartThings, Insteon, Wink, Uber, CNN, Allrecipes, Opentable, Amazon Video, and more. The Echo Show comes with an Intel Atom processor and is being advertised for video processing through Amazon’s Video service, so it does have the power to process and utilize Kodi as well.

As soon as we can get our hands on the Show, we will post a tutorial below on how to setup the Amazon Echo Show Kodi functionality of the device.

For now, click here to head to Amazon and preorder the Echo Show, which is the only way to guarantee that you’ll get one on launch date. The Amazon Fire TV and Fire Stick are regularly out of stock due to high demand and the Show should be no different in comparison.