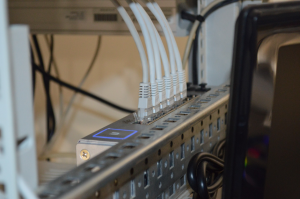 Bandwidth throttling is exceptionally frustrating; there’s no denying it. You might find that you’re halfway through bingeing your favorite show on Netflix, and all of a sudden, you’re met with endless buffering that stops you from tuning in.

While you might think it’s a connectivity issue, more often than not, it’s a deliberate act carried out by your internet service provider to control your internet speed. But is this legal? Can your ISP really limit your connectivity, even when you sign up for an unlimited internet bundle?

What is Bandwidth Throttling?

Bandwidth throttling is when your ISP deliberately slows down your internet connection, which limits the platforms and services you can access online. Most notably, it affects your ability to stream live content and shows from popular streaming platforms like Netflix and Hulu.

ISPs throttle your bandwidth for many reasons, including:

Regardless of what is written into your contract, bandwidth throttling is commonplace. Many ISPs justify this to limit congestion on their network and to create a level playing field for all users. This means the provider doesn’t need to upgrade their equipment to manage the increased internet traffic.

Some ISPs even throttle bandwidth when users attempt to access a particular site like Netflix, as they typically consume a large amount of data. While unfair and frustrating, it’s a practice that is unlikely to change anytime soon. Therefore, to avoid bandwidth throttling, you need to take matters into your own hands.

How does a VPN help you to avoid bandwidth throttling?

Although bandwidth throttling is undoubtedly frustrating, you can easily avoid it by using a VPN. ISPs only tend to throttle users that access particular sites at specific times of the day. They do this by looking at the content that you access, and if they deem it to be using too much data, they can choose to throttle your bandwidth and slow your internet connection down.

If you install a VPN on your device, your online activity will be hidden from your ISP. This is because VPNs encrypt your traffic, and your ISP won’t be able to make sense of the information. Therefore, when identifying high-priority targets, your ISP won’t identify your account as one to throttle.

What are the other benefits of using a VPN?

While they’re the perfect solution to bandwidth throttling, this is just one of the benefits of utilizing a VPN to improve your internet experience. There are actually many other reasons why you should use a VPN, including:

Are VPNs popular in the US?

45% of Americans are more worried about their online privacy today than they were one year ago. With so many attacks being reported since the outbreak of COVID19, people are right to worry about their online security. This has led to 68% of adults in the US using some type of free or paid VPN. This equates to an estimated 142 million users, which highlights just how popular they have become with security-conscious internet users.

As you can see, downloading a high-performing VPN is the best way to combat the frustrating practice of bandwidth throttling by your internet service provider. But using a VPN has so many other benefits as we’ve explored, and with so many people concerned about internet security in the present day, a VPN should be an essential tool on your PC, tablet, or smartphone to protect yourself when you’re online.