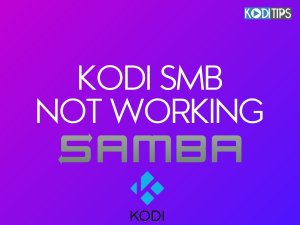 Hello reader! I’m back again with yet another troubleshooting procedure for Kodi. And this time, I’ll cover the Kodi SMB not working error.

Habitual SMB users on Kodi need no explanation about SMB. However, for the benefit of the new SMB users, I’ll glance through SMB for Kodi.

Server Message Block (SMB) or Windows File Sharing is a client-server protocol Windows uses to share resources over a local network. All the Windows PCs are equipped with SMB and a home user can easily set it up. What makes SMB the best network protocol is its versatility. It can be accessed by any operating system to stream content on any Network Attached Storage (NAS) or other external remote hardware.

In the following sections, you will learn:

How to access local files on Kodi via SMB?

There are two basic ways to add a remote media folder to Kodi via SMB. You need to give the folder containing media files Read/Write permission to add the Source Folder to Kodi.

Note: SMB v1 is no longer supported on Kodi. Make sure you are using SMB v2 or higher.

SMB v1 had security issues on Windows and was thus slashed off Windows. The only available option to access shares was to input the IP address or the device name with the path.

To enable browsing SMB shares again, Kodi v19.1 implemented the WS-Discovery protocol (a multicast delivery protocol to access files on a local network). Follow these steps to add a share to Kodi with Windows Network (SMB).

From the list of options, choose Windows Network (SMB)

Now, navigate to the source folder path and select it

Hit OK to add the folder to Kodi

If the Windows Network (SMB) method doesn’t work for you, try adding the source folder with the device’s IP address or name. Here’s how to do it!

To add a source folder using the IP address or device name, follow these steps.

Reserve a static IP address for your hardware.

To create a static IP address, add the MAC address of the device to the router’s Reservation list after logging in.

In the Add network location window, set the protocol to Windows Network (SMB)

Your share will appear in the Browse for new shares list. Depending on the method you used, you would either see the IP address or the device name for the share.

Before we get started with troubleshooting, make sure you are using SMBv2 or higher. These steps might help you fix the SMB not working error on Kodi 19.

Open Kodi on your PC and go to Settings

Under SMB client, set the Minimum protocol version to SMB v1 if it is set as None or other

Check the Maximum protocol version and change it to SMB v3. Some Kodi users suggest using SMBv1 for maximum requirement but it is considered to be not as secure as the SMBv3.

Go back to the Library to update the share path

Select a media type and go to files

If you have an existing path in the selected media type, click and hold and select Edit source. Otherwise, select the Add [media type] option

In the Add [media type source] window, click on Browse

If you have the shares added to Kodi, select one. Otherwise, go to Add network location.

Follow the above steps to add a share using the IP address or device name. Make sure to use the same username and password as that of your computer.

This will resolve the ‘Operation not permitted’ error and SMB will be up and running on Kodi in no time. You can now easily access old SMB network locations with the set username and password.

If the above troubleshooting method doesn’t fix the Kodi SMB not working issue, try these fixes.

If you are an avid Kodi streamer, you might want to check out the Best Kodi tips.

SMB has been the standard client-server protocol on Windows and DOS since 1992. However, there are quite a few SMB alternatives you might want to consider to enable sharing local files to Kodi. Check them out!

UCS is an integrated identity and infrastructure management system used to administer users and applications. It is compatible with Windows, Mac OS X, and Linux. It uses Extensive Directory functions to allow integration in Windows.

NQE is one of the best embedded implementations of the SMB protocol. It is also known as Common Internet File System (CIFS) which is a network file system protocol for providing shared access to files and printers between devices on the same network. With the help of CIFS, you can edit, add, and remove files from the Kodi library.

Which is better: SMB or NFS?

SMB and NFS are network protocols used to access files over a network. With NFS, every user on an authenticated system can access a specific share as it uses the host-based authentication system. This is not possible with SMB as it uses user-based authentication, by which it is possible to separate multiple users from a single authenticated machine and enable file and printer sharing to all users at once. SMB is the ideal solution for Windows servers, whereas unencrypted NFS is the first-choice protocol for the Linux OS.

Does Windows 10 use SMB?

Currently, SMBv1, SMBv2, and SMBv3 work with Windows. However, the configuration requirements might vary from server to server.

SMB not working has been a pressing issue on Kodi recently, especially after the release of Kodi 19. Kodi 18 didn’t have any issues with SMB but a lot of Kodi 19 users had trouble with using Kodi for folder share.

The above troubleshooting method should help you fix this burning issue. If not, contact Kodi support. Let us know in the comments section down below if this method worked for you.