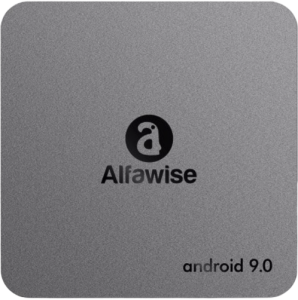 The Alfawise A8 NEO is an Android 9.0 with the latest features and a killer price. Our guide below has all of the details on this Android TV box including where to buy for cheap!

The Alfawise A8 NEO is a new Android TV / Kodi box worth checking out. It comes with some of the latest features including the new Android 9.0 operating system, H.265 support, the latest Rockchip CPU, and availability all around the world.

In addition, the A8 NEO comes with a few unique features:

The Alfawise A8 NEO comes in a compact black box with gold trim and includes the Kodi box, power adapter, HDMI cable, and remote (batteries not included).

Setup of the A8 NEO is really easy! Simply power up the unit and you will be instantly greeted with a familiar (if you’ve seen an Android box before) tiled interface with the Kodi icon. Simply press this to launch Kodi. There is no setup time other than configuring the date and time in the Android settings.

Playback is smooth as expected on the RK3229 and Android 9 looks to be a solid platform for Kodi to run on top of.

Like all Android TV hardware, you can download and install apps via the Google Play Store, which is pre-loaded onto the box. All of the top Android apps such as Kodi, TVZion, ES File Manager, FireDL, Filelinked, and more run beautifully on the hardware.

Check out the specs of the box below and then enter our contest to win a free copy!