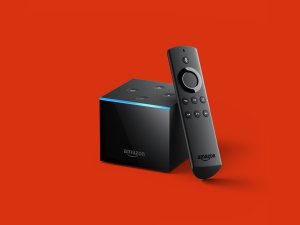 If you are looking for an easy-to-use Kodi Box, the Amazon Fire TV is for you. The Fire Stick and Cube TV have a ton of great features and specs at a great price. The Amazon Fire Stick is one of the most popular Android TV alternatives you can buy today.
Other than buying a smart TV with Android TV built into it, the Amazon Fire is the easiest way to turn your TV into a smart one.

Before digging into the guide, check out the table of contents below.

This guide helps users cut the cord and still stream any TV show and movie.

What is the Amazon Fire TV?

The Amazon Fire is a line of media boxes created, manufactured, and distributed by Amazon. It is designed to help you stream TV shows and movies through the use of apps that are installed on the system.

Compared to Android TV boxes which come in many brands and firmware options, the Fire TV only has the FireOS. It is optimized and knows how to process video well.

Since the Amazon Fire TV is made from Amazon, it comes enabled with Alexa smart home functionality and integration. You can control apps on your device with your voice.

The Fire TV is currently available in two different models:

The Amazon Fire Stick is the most popular TV box because of its low price point. It is often the first smart TV box that visitors of our site purchase. Compared to the full Fire TV, the Fire Stick has less RAM and power.

Setup of the Fire Stick is as simple as plugging it into the wall and then into your TV directly.

The Amazon Fire Stick first generation does not include an Alexa remote, so you cannot control the device with your voice.

Because of its introductory price point, Amazon often has deals on the device. You can check out the current Firestick price of the device below.

The Cube TV is the bigger version of TV box. It sits beside your TV and connects it with a standard HDMi cable like other android boxes.

The Amazon Fire TV box Cube version has more RAM and a better processor. Its power is more in line with other high powered boxes such as the Nvidia Shield TV.

Previously, an Amazon Fire TV Dongle was availble, which was a hanging stick-like machine that plugged directly in to the back of your TV. You may see these Dongle’s available for sale, but they are not currently apart of the active Amazon lineup.

In our guide below, we will walk through the following important Amazon Fire TV information such as:

The Fire TV Stick has an older 1.3GHz Quad-core processor with 1GB of RAM and an 8 GB hard drive. It does not support 4K video or HDR and has limited ports installed due to its small form factor.

It plugs directly into the HDMI port in the back of your TV and comes with a remote.

For the very basic of media users, it is a great starter box. If you are looking to do some live video streaming, the 1 GB of ROM is not sufficient from our testing.

The other big drawback of the Amazon Fire TV Stick is that it contains no Ethernet port. This means you need to buy an attachment if you want hardwired Ethernet support.

The Amazon Fire TV Cube version includes a better 1.5 GHz Quad-Core processor with 4K and HDR video support. Also, it has 2GB of RAM which is better for live video streaming.

Storage is alsovdoubled to be 16 GB. As well, it has a built-in speaker and 8 microphones so that you can control it from afar with Alexa controls.

A hard-wired Ethernet port is included so that you can get maximum speed out of your internet connection.

Where Can You Buy the Amazon Fire TV?

The Amazon Fire TV is only officially available through the Amazon website. Both versions of the box are available worldwide.

Check out and buy either version of the Amazon Fire TV below.

With the Amazon Fire, you can perform a bunch of basic and advanced media streaming and functionality.

Each box comes preloaded with the Amazon Operating System, a TV-optimized grid interface similar to Android TV or the Apple TV.

Preloaded on the Amazon Fire by default are a number of apps, including Amazon Video, Prime, and Music.

The Amazon Fire also comes with an Appstore, which can be used to download a bunch of approved Amazon addons including:

Third party Amazon apps can be side-loaded onto the device using a number of methods.

Sideloading apps are more advanced, but we have tutorial guides on our website to help users load some of the most popular applications.

Some examples of third-party apps you can load onto the Amazon Fire TV hardware include:

Setting up the Amazon Fire TV is insanely easy.

That’s it! When you power up the box for the first time, it will walk you through setup of the device.

How to Install Kodi on the Amazon Fire TV

That’s it! Kodi will now be in the apps folder of your Amazon Fire device.

Check out our home page for guides and information on how to configure Kodi after you have it installed on to your system. You may want to setup a Kodi VPN on the Amazon Fire TV, which you can do by clicking here. If you need to sign up for a VPN, refer to the information below.