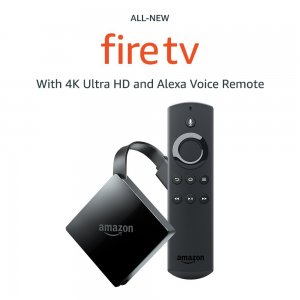 Available today, Amazon has a brand new Fire TV with 4K and HDR video support, the 3rd generation of the popular Kodi box. Read the details below and buy one today.

December 4th: Amazon has released a nice promotion for those who want to get the new Amazon Fire TV this holiday season. The regular device is $70 but for just an extra $5 more, you get an indoor HD antenna which lets you stream local channels in your area.

In urban areas, this antenna can give you 30 or more free live HD TV channels in some cases. Pair the antenna with a DVR and storage solution like the HDHomeRun for a full cable TV replacement.

Available to buy today, the brand new 3rd generation of the Fire TV Kodi box. The new Fire TV comes with 4K and HDR video support, meaning that you can now stream the highest quality of videos on your Kodi box.

The new Fire TV has also received a price cut to $69.99 and there are rumours that there will never be an upgraded Fire TV Stick. The new box comes with an upgraded 1.5GHz processor, 2GB of RAM, and an upgraded Alexa voice remote. Amazon has gone very aggressive with the new Fire TV, which is $100 cheaper than the latest Apple TV recently announced.

The updated Amazon Fire TV has a smaller form factor and also comes with no ethernet port included on the device, similar to the Stick. If you need wired ethernet (we recommend it for live streams but not replays), Amazon has also introduced an ethernet adapter alongside the box which can be purchased for an extra $15. As a bonus, Amazon is selling the Fire TV in bundles with an antenna which can help you stream live local channels.

Buy or check out the new Amazon Fire TV Kodi Box via the links below:

The new Fire TV should be one of the hottest media players of the 2017 holiday season. In addition to Kodi, you can install hundreds of other media apps. If you have an old generation Fire without Alexa voice support, now could be the perfect time to upgrade!

In addition, Amazon has also introduced a whole lineup of new Echo devices:

To install Kodi on your new Amazon Fire TV, check out our guide here.