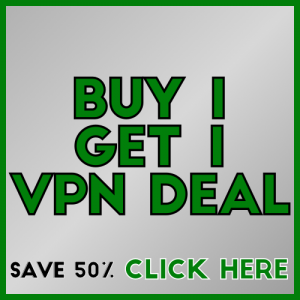 IPVanish is having a really nice VPN sale for the next week only – buy one year and get one year for free! This is the first time we’ve seen this promotion one and will save you a ton of money on a new VPN.

The promotion is for World VPN Week and breaks down like this:

That’s nearly the same price as a large coffee and less than a large latte or cappuccino! Act now though, because this deal is only for 1 week and is over on April 20th.

IPVanish shields users all over the world from ISP spying, public Wi-Fi threats, and malicious third parties. They offer the following nice features for Kodi users:

Buy One Get One Kodi VPN Deal

Here are some top Kodi VPN links and setup guides to help you get setup after you sign up for a VPN:

Once again, click here to get that Buy One Get One VPN deal.

This deal is only active from April 13th – April 20th so take advantage now.

Comment below or let us know on Twitter if you have any questions. Visit our home page for more Kodi tips, tricks, news, and information.