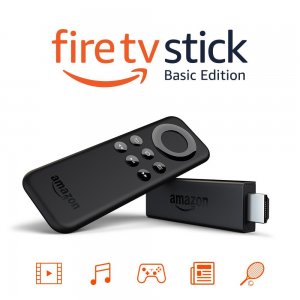 Available today, Amazon has a brand new Fire TV Stick Basic Edition, which opens up the Fire Stick to over 100 new countries! Read the details below and buy one today.

Available to buy today, the Amazon has announced the Fire TV Stick Basic Edition Kodi Box. Users who live in the United States won’t be that impressed: The Basic Edition does not come with Alexa support and the remote has been simplified to remove the Alexa button. As well, the device costs $49.99, $10 more than the standard Fire TV Stick does. However, Amazon is also shipping the device free everywhere, which negates the price increase for most people.

The reason for Amazon not including Alexa in its Basic Edition most likely has to do with geo restrictions and lack of functionality worldwide. Alexa can be used in the USA to order Amazon products and look up geo-specific information.

The basic edition specs are the exact same as the old Fire TV Stick. The box comes with a 1.3GHz processor and 1GB of RAM.

Buy or check out the new Amazon Fire TV Stick Basic Edition Kodi Box via the links below:

The new Fire TV Stick Basic Edition Kodi box should be one of the hottest media players of the 2017 holiday season. In addition to Kodi, you can install hundreds of other media apps. If you have an old generation Fire without Alexa voice support, now could be the perfect time to upgrade!

Recently, Amazon has also introduced a whole lineup of new Echo devices and updated their Fire TV as well:

To install Kodi on your new Amazon Fire TV Stick Basic, check out our guide here.

When you get your box, easily install your VPN onto your Fire TV Stick Basic edition by clicking here.