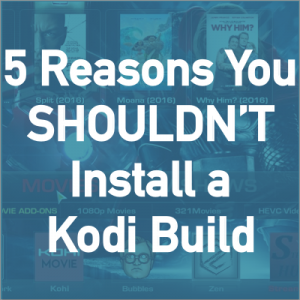 Many new Kodi users are quick to install a Kodi build, which installs a skin, repositories, and addons automatically for them. This cuts down on your setup time but we suggest that you don’t rush to install one without better understanding what Kodi builds do and don’t do.

Some of the most frequent questions we get asked constantly are what is the best and how to install a Kodi build. And while we have admiration and respect for build makers who can create their own graphics and customize their own beautiful layout and combination of addons, we want to caution users why installing a Kodi build isn’t such a good idea.

If you aren’t familiar, a Kodi build is a pre-canned packaged Kodi setup where the addon, theme, settings, graphics, information, and display are all setup as soon as you install it. Most frequently, a build will use a different skin so that your Kodi layout no longer resembles the default Estuary skin introduced with Kodi 17. A build will also come preinstalled with Kodi repos and Kodi addons, meaning that you save yourself a bunch of time verses installing everything manually yourself.

However, installing a build on your box isn’t all amazing and there are some real risks and considerations you should give  before proceeding. Especially if you are a newer Kodi user or self-admittedly do not know how to install addons or perform basic Kodi maintenance, you should read our guide below and make the decision that makes sense for you.

So, here are our top 5 reasons you shouldn’t install a Kodi build:

For very new users, you must understand that Kodi is just an open source media player. It knows how to play audio and video content from either a local source on your computer or a remote source supplied by a Kodi addon. It doesn’t know anything about any movie, TV show, actor, ctress, director, plot line, trailer, quality, or anything else. All of these settings, interfaces, and information come with the Kodi repositories and addons you install.

Each Kodi repository and addon loaded on to your system is simply a pointer to an address on the internet. Every time you launch Kodi and use an addon, a few actions are taken in the background:

Naturally, all of the actions above take time – sometimes microseconds and sometimes longer depending on how fast your internet speed is, where you are located in the world, and how fast the website it is connecting to responds to your query.

Getting back to Kodi builds, many of them come with addons and repositories you’ll never use – either they are dead, you aren’t interested in the content, or you find the addon you like and you only use that one 90% of the time. All of the addons you don’t use are still queried constantly, slowing down your system and giving you more frustration. The only build that will have EXACTLY and ONLY what you want is a Kodi setup you create yourself.

Android TV improvements have been made in the last few years to the RAM (how many things can be processed at once) and CPU (how fast things are processed), but the disk space has remained consistent at 16GB for most boxes. 16GB is a lot of room in most cases (the Android operating system and Kodi software only takes up 3-4GB of that), but a heavy build will eat up a larger percentage of that space.

Rather than using up so much space for a build, your space can be better used in the following three ways:

By installing all of your own addons and content, you’ll have a better idea of how your space is being allocated and used by Kodi. Using as little as possible will ensure that Kodi has plenty of room to do all of the things it needs to do in the backend without you seeing.

Kodi is a funny community. Addons have a lifespan of a few days to a few months on average and there is constant turnover of developers, content curators, and code contributors. Over the last few months, the scene has exploded with templated and forked addons, making it near impossible for a build maker to constantly offer only live and supported addons.

Even worse, there are some people in the community who incorrectly take over dead addons without renaming them, pushing unwanted and malicious updates that automatically update on unsuspecting Kodi boxes. In the past, these addons have requested payment or compromised parts of Android boxes. If you use a build, you rely on someone else to keep your box up to date and clean.

Kodi builds set your system up the way someone else wants it to be at a single moment in time. This means you have to be interested in the same addons, interests, and settings as someone else. When something changes, you have to wait for them to update and hopefully hand-feed you what you want when its much easier to just go and help yourself out.

If you found out about Kodi from someone who promised free live TV, movies, and content at your fingertips with little effort, you were lied to. Kodi is a media player only. Third party addons which enable content from the public internet are not supported by Kodi. As well, Kodi developers have no control over this content and addons operate as nothing more than search engines.

Kodi has an inherent learning process and if you aren’t willing to educate yourself and learn, you may as well turn off your box and throw it in the garbage. Download and installing a Kodi build is great at first, but what about when a new addon comes out and you want to install it yourself? Or you have Kodi audio problems and you don’t know where to navigate in the settings to fix them? Or an outdated repository is failing to update every time you launch your box?

Learning to navigate Kodi will help you fix and better understand these problems above.  Also, most build developers are not there to hold your hand on a daily basis. Few offer any support for the files they upload to the internet.

By learning to fix your own problems, no longer will you be dependent on a build maker to give you new and “working” content. Reading websites such as ours will give you valuable information to keep Kodi clean, fast, and working longer.

Despite what someone may have advertised for you, builds are not a plug and play solution. There is not a build or wizard today that sets you up 100% on your way to full Kodi customization and usage. This isn’t the fault of the build maker either – there are quality Kodi addons which give you access to customized and personalized content that are easy to setup but require manual effort.

Some addons that require custom setup and integration are as follows:

As you can see, there Is a large amount of customization available to you. If you expect to click three button and have everything you want or need, Kodi is not for you.

Hopefully the 5 reasons you shouldn’t install a Kodi build above help you to understand why an automated and quick Kodi setup isn’t that great. A lot of problems you have where something doesn’t work is a product of your own setup and is self-induced.We get tons of support questions daily from users about a specific build. The administrator of KodiTips does not use a build and has no knowledge of what somebody else has done. It is impossible for us help you out with your issues. Moreover, many users don’t know how to generate an error log for us to look at. Error logs are needed for diagnosing issues and are required for any assistance. Users who didn’t install any of the addons, repositories, skins, or settings on their Kodi system often don’t realize this.

If the main reason you want a Kodi build is for the customized look verses the default Estuary Kodi skin, consider installing a different Kodi skin instead. If you navigate to the Install From Repository screen, go into the Official Kodi Repository, and then click on Look and Feel, you’ll see a large selection of Kodi skins which will customize the look and feel of your device. No longer do you need to depend on someone elses style and taste for your Kodi setup.

Take some time today to factory reset your Kodi box and install only the addons you actually use. Not only do we guarantee that your Kodi box will run faster, but you’ll also have a better understanding of where things are located and how things work.

Let us know on Twitter and Facebook if we can help you out more. We have a setup guide for new Kodi users that you can refer to for more information and help to get things started without the need for installing a Kodi build..