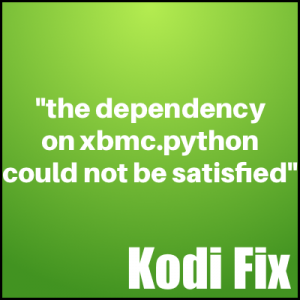 Are you seeing a “the dependency on xbmc.python could not be satisfied” Kodi error? This error commonly occurs when a Kodi addon fails to update to the latest version.

Come learn what this error message means and the EASY way you can fix it today.

NOTE: If you are reading this on any other website other than Kodi T I P S.xom, this article has been stolen.

Protect Yourself While Using Kodi

What is the Python Dependency in Kodi?

Python is the programming language used by all Kodi addons. The Kodi media center software comes with the Python dependency installed.

Kodi addons “import” this dependency into their code so that they can use special modules and functions in Python without having to manually import it.

Every single addon uses this dependency, which makes it one of the most important to come packaged with Kodi.

Why Do You Get the “Dependency Could Not Be Satisfied” Kodi Error?

As we mentioned above, Kodi addons must import this dependency into their code.

The other thing to know is that like all software, Python releases new versions of their code.

EXCEPT if the following thing is true:

A Kodi addon tries to import a newer version of Python than what is installed with your version of Kodi.

This is why you see the “the dependency on xbmc.python could not be satisfied” Kodi error.

How Do You Fix This Python Dependency Error?

To fix this issue, you simply need to update to the latest version of Kodi.

You will see this issue if a Kodi addon tries to update to a new addon version that is trying to access a newer version of Python than what is currently installed.

Recently, this has been happening because developers have been updating code in advance of the new Kodi 18 Leia update.

What If You Can’t Update Kodi?

Some users still have Android TV hardware running version 4.4 of Android, which has not been supported since the start of Kodi 17 Krypton. These users are unable to update to Kodi and see the latest version of Python.

Unfortunately, there is no fix for you if you are running Android 4.4. 4.4 has not been supported in a number of years and it is highly recommended that you buy a new Kodi box today.

In addition to the newest version of Python, the latest version of Kodi supports new modules, dependencies, and file formats that they didn’t in the older versions.

Hopefully this helps you our with your Kodi “the dependency on xbmc.python could not be satisfied” error.

Sign up for a premium Kodi VPN and access the internet unrestricted. We offer exclusive discounts NordVPN, highly respected in the Kodi community. NordVPN has some great features for users:

13 thoughts on ““the dependency on xbmc.python could not be satisfied” Easy Kodi Fix”