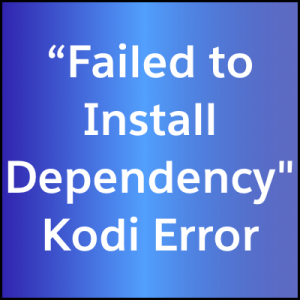 Are you seeing a “Failed to Install Dependency” error in Kodi when trying to install a Kodi addon or repository? Lately, the issue has popped up when installing Blamo or Griffin addons such as Neptune Rising, Uranus, Placenta, and others. Read this guide for details.

March 26th: If you are seeing a “failed to install dependency” Kodi error when trying to install or update addons such as The Unjudged, check out our new section added below!

The “Failed to Install Dependency” Kodi error pops up on occasion when trying to install a Kodi repository or addon. The error prevents you from installing what you want within much explanation or detail.

In the last week or so, this issue has popped up with both the Blamo (Neptune Rising, Uranus, Placenta) and Griffin (Uranus, Joshua) repository addons. It is also affecting some addons which use the Universal Scrapers dependency, a fork of NaN Scrapers.

What is the “Failed to Install Dependency” Error?

Kodi repositories and addons often install dependencies along with their base code. Dependencies are side modules and addons that provide metadata and additional information. They can be reused multiple times by different addons so that developers don’t have to do all of the coding themself each time.

When this error comes up, it means that a dependency failed to install. This can happen for a number of reasons:

If you have an old version of Kodi, it is recommended that you upgrade right away as good practice.

If the host is offline for maintenance (we’ll try to tell you on our Twitter and Facebook accounts), you’ll have to try again later when it is back online.

Recently, users have been reporting issues with installing or updating certain Kodi addons such as The Unjudged and others. We’ve dug into this issue and have determined the problem to be related to Universal Scrapers, a common dependency module that many addons use.

When you receive the “Failed to Install Dependency” Kodi error, follow these steps:

It appears that some addons are not correctly importing the Universal Scrapers repository. This is causing failure on installation.

If you are just recently seeing this error when trying to install a repository such as Blamo or Griffin, the issue falls into the third note above.

Recently, some developers have moved their Kodi code to GitLab, an alternative to the popular GitHub website. However, GitLab appears to be proactively banning Kodi related content from its website. Universal Scrapers, which is used by addons in Blamo and Griffin, was originally being stored on GitLab and was banned.

Moving Universal Scrapers off of GitLab required an address change in the Blamo/Griffin repo code and a new repository version.

To force an update of all Kodi addons and repositories in Kodi, follow these instructions:

If checking for updates manually doesn’t give you an updated repository, you’ll need to manually reinstall the Kodi repository using our guides: Blamo, Griffin.

Hopefully with this information, you know what the “Failed to Install Dependency” Kodi error means and you can safely get the latest working version of each addon without getting too frustrated.