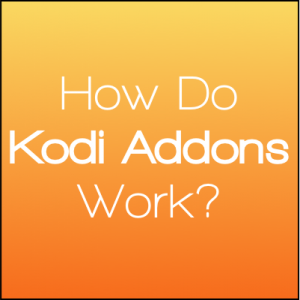 They provide metadata, media, information, and a whole lot of content to comb through, but how do Kodi addons work and what are the good ones? Read our Kodi addons guide below for a full breakdown and learning session of third-party content.

Kodi is a media center that knows how to decode and play video files passed to it either locally or through the use of third-party Kodi addons. But how do these addons work? How are they the same and different from each other? What components do they have? This guide is meant to simplify and answer all of these questions.

So, whether you are a Kodi expert or a beginner looking to understand the basics, buckle in and lets have a look.

1) How Are Kodi Addons Created?

For those of you who know nothing about computer programming and imagine Kodi addons to be full pages of unreadable text in a word file, you are mostly right. You might picture a programmer around the world locked in his mom’s basement in front of a computer, jamming keys on his keyboard for days on end in order to come up with his masterful all-in-one addon. This is where you are wrong!

Addons are a collection of one or more files written in Python computer code, a common open-source language. Open-source means that the Python code is not packaged and compiled into unreadable machine language code. In fact, there is no packaging required with Python code. If you know where a Kodi addon is located, you can view the code for yourself. You can read, learn, copy, and understand the code with nothing else but time.

99.9% of Kodi addons are not created from scratch. Because they are open-soource, the leg work coding only had to be done once. Now anybody can take that code, reuse part or most of it, add their own icons and name, and release their own third-party addon.

TV & movie companies who have been targeting addon creators with cease and desist letters would have you believe that the code in each addon is home to pirated content, forcing itself upon users and destroying the profits of multi-billion dollar conglomerates. The truth is, the code behind each addon accomplishes a few basic tasks:

This is slightly over-simplified but you’d be surprised. Kodi addons are simply a shell of instructions on how to display information on your Kodi software. The right dependencies working in the background provide content for users and luckily, most of these are well-developed and maintained as well.

Kodi scrapers pieces of code (Python!) that visually scrape a website looking for media links to file locker hosting websites which make up the majority of TV or movie files hosted today. They look through the source code of the website, pulling out media file URL addresses and quickly processing metadata like the title and quality from the filename.

You may have heard of websites such as OneClickMoviez, Alluc, Popcorn Flix, Sceper, or RlsBB. These are current or former websites that have Kodi scrapers created for them.

As things have developed over time, scrapers now generally sit as their own separate dependency. Two common scraper packages are NaN Scrapers (now obsolete) and Universal Scrapers. By keeping them as a package, anybody can update the code and things will update for ALL addons which use those scrapers.

In summary, Kodis scrapers search through websites that host media files and pick out those URL addresses. These websites are not owned or affiliated with any Kodi developers. Kodi addons utilize scrapers to pull in and find media links of content when called upon.

Kodi resolvers are pieces of code (Python AGAIN, whoo!) that visually decode file locker hosting websites in order to get to the raw .mp4 or .avi video file. They manually navigate through ads, 10 second countdowns, captcha problems, and other tactics used to disguise links on these websites so that you click on an advertisement if you were to visit the link on your computer.

File locker websites use these sneaky tactics because they rely on advertising revenue to pay for server costs. HD media files take up hundreds of megabytes of space. The reason why some Kodi links have a “pairing process” is because some more reliable free file hosts once threatened to block Kodi or shut down completely if they didn’t get more advertising revenue to pay for their expenses. The pairing process takes you back to these websites on your phone/computer, where you have to manually navigate.

You may have heard of such websites as Openload, File Factory, Vidzi, TheVideo, or Gvideo. These are file lockers that have had Kodi resolvers built for them.

Resolvers sit in on their own so that they can be updated universally once and be updated in every addon that calls on it. Two popular resolver sets are URLResolver (the original) and ResolveURL (a newer fork). Kodi resolver files don’t care or know what specific media file it is decoding. It doesn’t know what a movie or TV show is. It’s job is to search the file locker, find the raw media file, and pass this to Kodi for playing.

So you now know what scrapers and resolvers are – so what? Well whether you realize it yet or not, you now know how Kodi addons work and pull links. Pretty much every single Kodi addon available today uses the same scrapers + resolvers to play content. Why reinvent the wheel when the frame is solid already?

Being that most Kodi addons use the same scrapers and resolvers, this means that there is not as much variation in available content across each addon as you might think. If you are looking for an old episode of Seinfeld and Covenant doesn’t have it, you may think that Neptune Rising may have an untapped well full of working HD links for you. Surprise, surprise, you are wrong!

Once again, giant media conglomerates would have you believe that each Kodi addon is a cesspool of illegal content and media.  Kodi addons are all using the same scraper websites for links. This is the case for 95% of addons. In fact, the only addons that don’t use this framework are:

If you know of other addons which use special source, let us know on Twitter or Facebook. Other than the two above, every other Kodi addon is using the same sources

So if all Kodi content is pulled from other sources on the internet and decoded from the file locker, why are there so many Kodi addons? Truth is, there are only two styles of Kodi addons; multi-source and playlist. After that, the only difference is the presentation and how the menus are laid out.

Multi-source Kodi addons are ones such as Incursion, Exodus Redux, Yoda, or Gaia (Exodus and Genesis before that). They use automated metadata service such as TMDB to place the navigation menus in front of you. Metadata services are giant databases filled with TV and movie information such as title, genre, cast, plot, and more. They also store playlists such as Network Watching, Most Popular, Latest HD, Airing Today, or Trending. If you see these playlists in your Kodi addons, it’s a giveaway that a metadata service is automatically pulling in this data.

In a multi-source addon, when you navigate through each playlist and eventually pick content by title, the scraper dependency is called. Each scraper website is quickly scanned for file addresses which match the title you have picked. All results found are given to you in a list.

When you move through your scraper list and pick a link hosted on a file locker website, the resolver dependency is called. The resolver is decoded, the raw media file is passed to Kodi, and it begins to play for you.

The main difference in playlist Kodi addons verses the multi-source variety is that the menus and playlists are not auto-gathered from a metadata service. The Kodi “developer” has created something called an XML file which outlines the folders and links in the addon. If the dev feels like making a “top love movies of 2008 starring directors with an “I” in their name” they can do that for everyone to enjoy.

In the past, developers also had to manually find their own file locker links from scraper websites and paste that into their XML file. Nowadays, playlist addons easily integrate with Universal Scrapers and selecting a movie or show is no different than using Exodus with auto-play enabled.

6) How Do Live IPTV Addons Work?

Okay, so you have a good understanding about traditional movie + TV addons, but what about those live stream IPTV ones? Like other addons, live IPTV Kodi contains a scraper and a resolver as well and the definition of each is the same. A scraper searches through a website that presents live IPTV links or embedded streams and a resolver decodes a file locker video in order to grab the raw media file.

The most popular set of scrapers for live IPTV on Kodi is actually the SportsDevil addon, which contains scrapers for 10+ common streaming websites. You may have heard of some of these sites, including Firstrowsports and stream2watch. Many live IPTV Kodi addons use SportsDevil as a dependency and just rearrange or present links from it in different ways.

Like URLResolver, there is also a Live Resolver dependency for Kodi. It isn’t maintained to the same level as the movie + TV equivalent and is not in active development, but its job is the same!

We admire and respect all Kodi developers who have taken the time to add code or create custom XML files for the world to enjoy. However, hopefully the guide above helps you understand that Kodi addons aren’t that wildly different from one another. The same backbone is used in most and the only consideration is whether that addon’s playlists fit your style and niches or not.

For the reasons in the guide above, this is also a reason why you don’t need 50+ addons in that Kodi build of yours. More addons slow down your build and have to work and load in the background constantly. This will induce buffer, lag, and heartache. Keep your Kodi loaded nice and light today for the best experience.