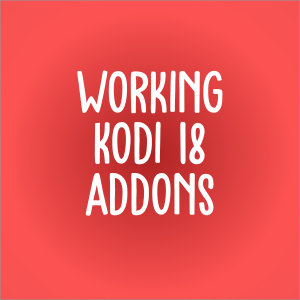 Are you looking for the top working Kodi 18 addons that work with the newest Leia version of Kodi? How about which addons aren’t working in version 18? Come get all of the details in our guide!

Since Kodi 18 was released at the end of January 2019, we’ve had tons of questions about which addons are working in Kodi 18 and which ones are not.

We polled our 70,000+ followers on Twitter to get feedback from every corner of the internet. The result is the best list of working Kodi 18 addons below.

The following list of addons for Kodi are confirmed to be working for users in v18 Leia. Feel free to install them today.

In general, most addons should work fine with Kodi 18. The latest version of Kodi was in development for over a year and its given developers a good chance to upgrade for maximum compatibility.

Below is a list of addons that aren’t working in Kodi 18. Underneath that is a rundown of some addon features we know currently aren’t working!

Addons Not Working in Kodi 18

What about which addons don’t work in Kodi 18? There aren’t many, but there are a few!

The addons above are currently not working in Kodi 18. Our recommendation is to stay away from them.

There are certain features in working Kodi 18 addons that do not work for some users. Because most Kodi code is reused by all addons, an update will be required before these features are fixed for all.

“Browse for subtitle” not working

Also affecting some ARM 32 bit processor devices is a bug where you cannot view trailers without crashing Kodi on SOME addons. This issue may be related to how the Youtube addon is called by these older Android TV devices.

We can confirm that 13 Clowns and a few others have fixed this issue.

What should I do if all addons are broken in Kodi 18?

If an addon we say is working above is not working for you, what should you do? This is the perfect chance to give Kodi 18 a fresh start by restoring a base install of Kodi and removing all of the outdated addons and build you have installed.

Especially if you are finding that NOTHING is working, you probably have a lot of old and outdated addons holding down your hardware.

Do you know of any other features that aren’t working in Kodi 18? More working Kodi 18 addons to check out? How about broken Kodi 18 addons? Comment below or let us know on Twitter if you have more information.